The free English translation on 15 November 2021.

The German-language document you may find here!

How far is Saturn from the Sun and Earth?

Where does Saturn get its Name?

Saturn is also one of the planets that were already known to the ancients. In the Roman world of gods, Saturn was the god of agriculture.

How big is Saturn?

Saturn is the second largest planet in the solar system after Jupiter.

Jupiter, on the other hand, whose diameter is about 20000 kilometres larger, has a mass more than three times that of Saturn.

Why is Saturn so flat?

With the help of a telescope, you can easily see Saturn's somewhat flattened shape. It is a consequence of the strong rotation and can also be found on other gas planets, but nowhere as strongly as on Saturn.

Why is Saturn so light?

Saturn has an extremely low density, even smaller than that of water. This makes Saturn the planet with the lowest density in the solar system.

Is Saturn similar in Structure to Jupiter?

Yes, Jupiter and Saturn are very similar in structure. Both are gas planets and have no solid surface. Saturn, too, is likely to have a solid core deep inside its atmosphere. Above this, as with Jupiter, there is a layer of metallic hydrogen.

Does Saturn also have Clouds and Storm Systems like Jupiter?

Yes, but the bands that make observing Jupiter so interesting are less pronounced on Saturn. Cloud structures cannot be observed in detail, so it was only the Voyager probes that enabled further comparison with Jupiter.

Long and stable storm systems were also found on Saturn, like the "big red spot" on Jupiter.

How many Moons does Saturn have? 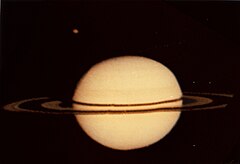 Why is Saturn's moon Titan unique?

Titan is by far the largest moon of Saturn. It has a larger diameter than Mercury and is also significantly larger than Pluto. Titan is also the only moon in the solar system that has a dense atmosphere.